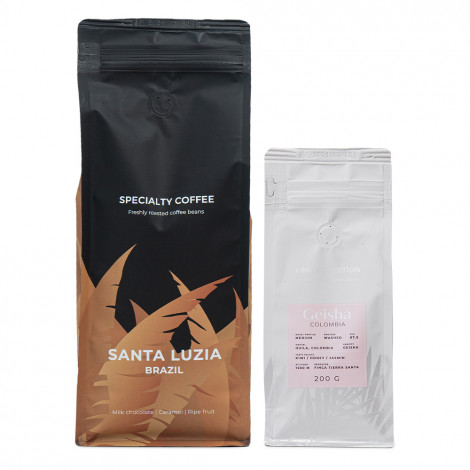 This exceptional specialty coffee from Brazil is bound to be appreciated by the lovers of traditional coffee tasting notes. The balanced flavour of this coffee combines sweet hints of milk chocolate and caramel with refreshing, subtle aroma of ripe fruit.

“First, José bought a hat, then came the knee-high boots, then a truck, and finally, in 2004, he was able to realise his life-long dream of buying his first coffee plantation. All he ever wanted was to introduce the world to exceptional coffee originating from his native municipality of Campos Altos (located in the Brazilian region of Minas Gerais).”

José Maria de Oliveira spent his childhood playing in a small coffee plantation owned by his grandfather. José can remember clearly how, as a young boy, he used to pick coffee cherries and run around the coffee trees. However, tough times lay ahead, so his family was eventually forced to sell the farm and move to a different region. When he grew up, José left his home for a big city and pursued a pharmaceutical career, but he was never able to stop dreaming about Campos Altos and the exceptional coffee that grows there. Finally, José made a decision: one day, he was going to purchase some land in the region of Campos Altos and become a coffee farmer. Soon enough, he went back to his native land and set about continuing the coffee-growing tradition that was so sadly broken off in his childhood.

In 2014, José built his very own dry mill and decided to focus his attention on the quality and maximum traceability of his coffee. In 2015, he established two coffee companies: one, called Cafe Campos Altos-Coffee Export, was based in Brazil, while Our Coffees was located in Northern California. The clients were amazed: a coffee farmer who controls the export of his coffee is an extremely rare sight to behold.

During frequent trips to California, José developed close relationships with the best experts of the coffee industry and learned about the many innovations of the coffee realm, which he quickly applied in his own farms. José started focusing his attention on the highest quality specialty coffees and the quality of his products soon reached new heights. It is one of his unique farms — the Fazenda Santa Luzia — that this extraordinary Brazilian coffee originates from.

Due to its exceptional quality and taste, this coffee is marked as Specialty. The SCA has scored it 84 points out of 100.

These luxurious coffee beans belonging to the arabica subspecies called Geisha are an absolute must for coffee connoisseurs! Vivid, refreshing and sweet, this coffee is a true feast of fruity and flowery notes unveiled in a cup of coffee. The tropical kiwis play first fiddle here, notes of jasmine sound in the background, while the aftertaste of honey dances on the palette. You might even be compelled to wonder for a second: is this really coffee?

Ever since 2005, when the Geisha subspecies blew coffee connoisseurs away in the Best of Panama coffee competition, its popularity has only increased. Given the particularly vivid flavour palette (the extraordinarily rich notes of fruit and flowers are reminiscent of tea rather than coffee), Geisha definitely does deserve to be called the best. This subspecies, which is native to Ethiopia, was discovered in 1931, in the Ethiopian village of Gesha (this is why the beans are sometimes referred to as Gesha as well). Later on, the subspecies travelled all across Tanzania and Kenya until finally, in the 1950s, it reached Costa Rica and then Panama. It was here, in Panama, at the start of the 21st century, that the unique qualities of these beans were acknowledged by the rest of the world — afterwards, it didn’t take long for them to spread across numerous other countries.

Today, we want you to meet the younger sister of Panama’s Geisha — the Colombian Geisha, which has already been applauded by the audience of the world’s coffee connoisseurs. Radically different from the traditional flavour profile characteristic of Latin American coffee, this species surprises, entices and tempts just as much as its famous precursor does.

The supply of this coffee is extremely low, so it belongs to the Limited Edition line.

Due to its exceptional quality and flavour, this coffee is marked as Specialty. The SCA has scored it 87.5 points out of 100.