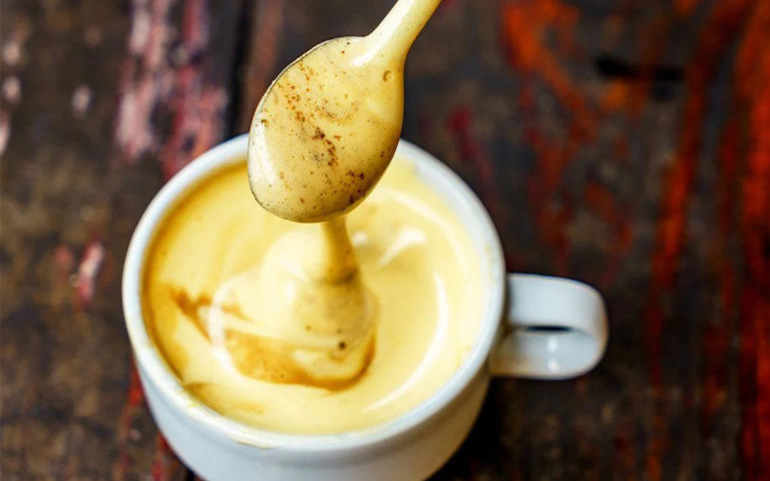 What is Vietnamese egg coffee and where did it come from?

As the saying goes:

“Necessity is the mother of invention”.

And that’s certainly true when it comes to the story of ca phe trung, or Vietnamese Egg Coffee. Back in 1946, the First Indochina War was causing milk shortages in Vietnam, and so one chef in Hanoi decided to take matters into his own hands – saving the day for coffee lovers. The man, a chef by the name of Giang, whisked an egg into his customers’ coffees to create a wonderful creamy, sweet alternative to milk, at the large hotel where he worked. It was a success, and his son still serves this egg coffee to this day, in the Café Giang’s three branches in Hanoi.

Perhaps his customers’ first reaction to egg in coffee was a little like yours is now. The chances are, you’ll only think it’s odd until you taste it, and there are some fantastic egg yolk coffee recipes out there to try – and they make the perfect treat on a cold day too.

How to make Vietnamese egg coffee?

Coffee with egg is not only enjoyed in Vietnam but is also a well-known beverage that’s popular amongst Scandinavian people. Their recipe is slightly different – they mix coffee with a whole egg (white and yolk) and cold water, to make a sort of paste. Then they add boiling water and sieve the whole thing before drinking. The foam will rise to the top, leaving a similar drink to the Vietnamese version in appearance. Egg in coffee will react with the bitter particles, bind to them and leave a clearer, milder coffee. Some fans of it even report a sort of ‘toasted cheese’ flavour!

But Vietnam’s version is more like a sort of mocha, with a sweet, floating top. And Vietnam, after all, is a country that knows something about coffee. They drink it all day (and night too sometimes), and egg yolk coffee is just one of their coffee specialities. Others include their delicious iced coffees. Vietnam is also the world’s biggest exporter of the Robusta coffee bean (that’s the slightly more bitter bean, second to Arabica in terms of global popularity). 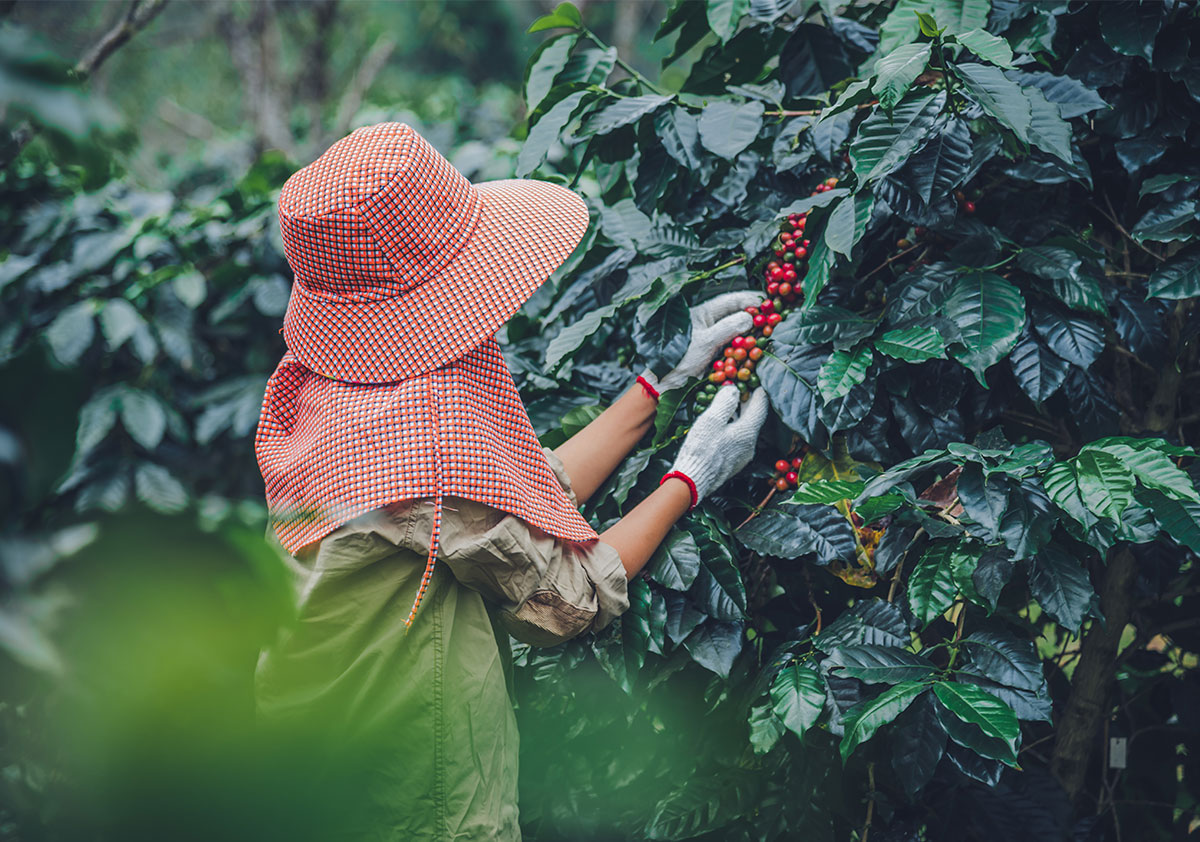 Where did eggnog originate from?

If you think about it, raw eggs are used in other popular desserts too – and egg coffee Vietnam-style can be enjoyed as a type of sweet pudding following a meal, too. Tiramisu uses a mixture of raw eggs in its whipped cream and is hugely popular all around the world. Eggnog is another similar drink, seen especially at Christmas and other festive occasions, which also uses eggs – but also adds alcohol to the mix! Where did eggnog originate? Well, probably in medieval Britain, as far back as the 12th or 13th century. Here, eggs were drunk along with sherry or other spirits, to celebrate good health or prosperity. Recipes vary, but it usually contains: 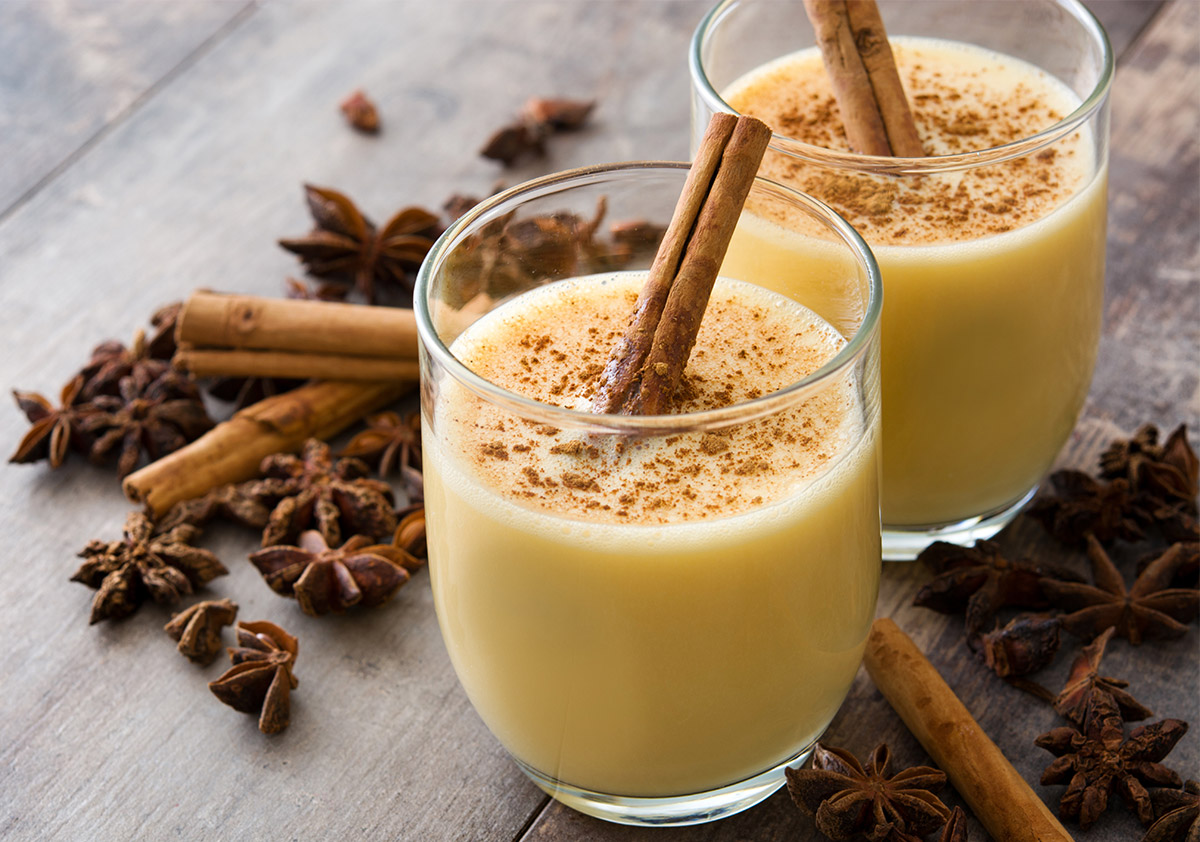 But what about the strange name? The word ‘nog’ is a bit of a mystery, but some think that it comes from the word ‘noggin’, meaning a wooden cup that would be used to drink the eggy goodness.

The popularity of eggnog eventually grew even further when American colonies – often who kept a lot of chickens – became fans too. They weren’t afraid of using a lot of alcohol, either – US President George Washington even wrote his own recipe, which included brandy, whisky, rum and sherry!

One word of caution, however; if you’re pregnant, it’s probably a good idea to avoid raw eggs, limit caffeine (and definitely avoid eggnog), and everyone making egg coffee should ensure that the eggs are from a trusted supplier and are as fresh as possible.

Other Asian countries also have their own versions of eggs in coffee – for example, in western Indonesia they often add honey and vanilla extract to coffee, and in Sri Lanka they mix in some brandy. But for a healthy, refreshing and truly unique coffee eggs are a great partner. So next time someone asks how to make Vietnamese egg coffee, or if you just want to give them a nice surprise, you’ll be able to pay homage to chef Giang and his tasty creation, and make your own delicious egg coffee.

Q. What is Vietnamese egg coffee?

A. It’s a delicious and unique drink consisting of black coffee with a whisked egg yolk topping, to which you can also add sweet condensed milk or even honey. Some alternative recipes mix the egg yolk into the coffee, and let the mixture separate, forming the creamy topping.

Q. Where did egg coffee originate from?

A. It was created by a Vietnamese chef in the 1940’s to combat milk shortages.

Q. What ingredients will I need?

Q. Is egg coffee or anything similar drunk anywhere else around the world?

A. Yes; in some Scandinavian countries they like to drink coffee mixed with egg, and in Sri Lanka they sometimes mix it with brandy, a little like the popular drink eggnog.

Q. Can I drink it if I’m pregnant?

A. It’s best to avoid it if you’re pregnant and raw eggs can very occasionally be unsafe for pregnant women.

Q. What about other egg-related drinks?

A. Eggnog is a popular drink in the Western world – drunk especially, at Christmas time, its usually made with eggs, cream, milk, sugar, brandy or rum, and a seasoning of nutmeg.