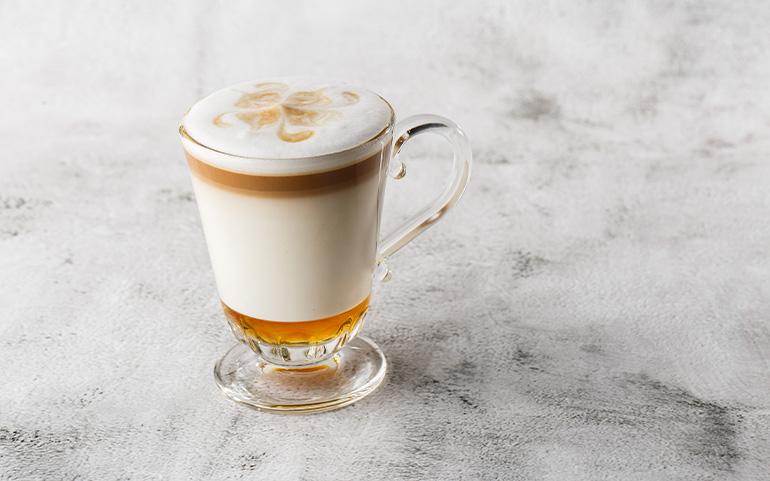 This week’s Coffee Break blog is from Andy Abraham, the runner-up in the second series of singing talent show The X Factor in 2005 – and also the UK representative in the Eurovision Song Contest in 2008 with his song ‘Even If’.

This year’s Eurovision is taking place this coming Saturday night in Rotterdam, Netherlands and Andy ran the rule over James Newman, the UK entrant this year who he is extremely impressed with – as well as providing his top favourites to look out for.

Before applying for The X Factor, Abraham was a refuse collector in London. He also spoke about having to return to becoming ‘The Singing Binman’ during Covid after all his singing work dried up – and how tough that was for him. And finally, as a previous coffee addict, he speaks about his love of the drink, particularly Irish Coffee!

Andy Abraham: “I used to be a coffee addict in my teens – I’ve eased off a bit now, but Irish Coffee is my favourite drink in the world”

“I used to drink coffee so much from when I was a teenager. I was high on caffeine all the time!  Back in the day, it helped me stay awake with all the early starts in my job and it was a huge factor in my younger years. If someone offered me a choice between tea and coffee, I’d always choose the latter. And that was everything from Nescafe through to cappuccinos and everything in between, I just loved the taste. Not to mention the odd espresso martini!
I used to drink coffee a few hours before performing my shows, but I have eased off drinking so much of it these days. However, I am a sucker for coffee cakes and coffee chocolate. Even now when I eat a pack of Revels, I pick out the coffee flavoured ones and keep it until last! But I still have a weakness for Irish coffee. It’s my favourite drink in the entire world, if I had to pick one it would be that for the rest of time. I love the sweetness mixed with the bitterness, the cream on top – it’s perfect.”

Andy Abraham: “James Newman’s UK entry is one of the strongest in years… it would be criminal if it finished bottom”

“I am incredibly impressed with Embers. For me, it’s one of the UK’s strongest efforts in years. It is one of those dance tunes that has elements of Duke Dumont and Disclosure. And I love that syncopated bassline, it’s a really good feature of the song. For me, out of all the dance songs in this year’s line up, it has the best live element and I can see it transferring so well to the stage. It’s such a shame for James there won’t be a packed out arena to react to the song live, because it would have got the place bouncing. Speaking from experience, the crowd makes a huge difference, they feed off the songs and take your performance to the next level.
“James has written a lot of massive songs for a lot of other people and it’s great to see that we have given such a lauded songwriter the chance to step out into the limelight himself. The pedigree is there, his brother John has done great things too and now it is James’ time to shine. I’m looking forward to him coming out of the studio and onto the biggest stage. I feel Embers is more suited to modern day Eurovision and the music that younger people in Europe like to listen to than my song back in 2008 which was more soulful. He clearly gets modern music and knows how to create a vibrant, catchy hook.
“It is 100% good enough to get on the left hand side of the leaderboard and if it finishes at the bottom, it will be criminal. It is a fantastic competition which has been ruined by political voting and it frustrates the hell out of me. Since it has become so prevalent, the UK never stands a chance and a lot of the songs in the past couple of decades – including my own in 2008 – were far better than where they have ended up on the leaderboard. Without a doubt, my song and performance was not bottom three material.
“As a result, I don’t think the UK puts its all into it as we know we aren’t going to win, which means it’s not taken as seriously as lots of other nations. Look at the Scandinavian countries for example, they have incredible pedigree in the music industry and they still take Eurovision seriously.
“So my advice to James – and the only thing he should worry about – is performing to the best of his ability with a fantastic song he has at his disposal. There’s nothing he can do about where he ends up, there are so many other factors at play with the tactical voting which sometimes makes a mockery of the actual music.”

1) Iceland (Daði og Gagnamagnið – 10 Years): I know they went viral with their effort last year, but this year’s song is even better. It exudes cool and I love the singer’s baritone voice. The choreography looks simple, but it’s not – it’s really effective and has an air of fun and coolness which I can’t get enough of. It’s my favourite tune in the competition.
2) Netherlands (Jeangu Macrooy – Birth Of A New Age): The male vocalist for this year’s host nation has a terrific voice, it has amazing harmonies and also this African theme to it which is lesser spotted in Eurovision. For me, that is really refreshing to see, not to mention that it’s an extremely powerful tune which I think will do better than is predicted.
3) Sweden (Tusse – Voices): I am really impressed with the pop R&B vibe of this song – and I was shocked to learn that the singer is still a teenager! It’s a really mature song and he sings it with such strength and conviction. It really wowed me and I hope it performs well on the night.

Andy Abraham: “I felt a deep shame at having to become the singing binman again to make ends meet… but the kindness of people got me through it”

“The last year and a bit has been really testing. Covid decimated my work. So during the first lockdown, when all of my work was cut off, I didn’t know what to do with myself after a couple of weeks. I did find myself going into a real form of sadness. I didn’t know if I was going to be able to go out and sing again and I lost myself within that.
“What I did is I looked at what I did before finding fame on the X-Factor and Eurovision. I saw that I still had my HGV license so I swallowed my pride and went back out on the bins! The singing binman was back again!
“What drove my decision to do that was life and Covid. Coronavirus made the world so uncertain and money doesn’t grow on trees. I needed to get out there and I needed to earn for my wife and my children to pay for the roof over our heads. That was the situation I was in and I had to deal with it.
“If I was very young in the business and then this situation happened, it would have been much harder to find a different job. But I was 40 when I found fame, so I had a varied life beforehand. I know what a hard day’s graft means. There are always avenues – as a youngster growing up, I did so many different jobs as I did not know what I wanted to do. So that helped in lockdown to be resourceful and draw on my former life.
“I had to get over my own personal shame that I put on myself. A lot of the sadness that I developed was down to me feeling a failure and not worthy. It was something I should not have burdened myself with, but it was tough to take. However, one thing which made me feel good again was while I was out on my rounds, people saw me and spoke to me in a really kind way. They really helped me with my self-worth that I am out there doing something not only for myself, but I am contributing out there at a time when everyone needs to pull together. So all in all, I am glad I went back to it.
“It was a shame that I should not have put on myself. I hate the term ‘man-up’, but I had to get myself together. I had bigger things to look after. I always thought to myself that there are people out there far worse off than me. I may have lost work, but I was not out of work, not to mention me and my family had our health.
“I will definitely keep hold of my day job. If I am being sensible towards my home life, it makes sense for me to do that, however tiring it will be to perform and have a day job. I will soon probably be the only performer who is out there doing rounds at 5am on a consistent basis. But needs must, I am 56 years of age. You can teach an old dog new tricks, but it is a lot harder for people of my age, so it’s the younger singers who I worrymore about. I am at peace now that I will be doing the bins alongside my singing career until it makes sense for me to leave.
“My tours around the country, private and corporate work, cruise ships – I am itching to get back to all of that when I get the first chance to do so. Considering it has been nearly 17 years since I did the show and it’s been 13 years since I did Eurovision, I am still getting agents calling me to check my availability and get me work.
“The inquiries are starting to build up again at the moment and work has been cemented down for me, which has given me a spring in my step for sure. It’s a lovely feeling and makes me feel wanted, that people want to hear me perform my nostalgic tunes again. And that will ultimately get me back into writing new material again, so watch this space!”

Gabija
Coffee Break With
Quick menu
Andy Abraham: "I used to be a coffee addict in my teens - I've eased off a bit now, but Irish Coffee is my favourite drink in the world"Andy Abraham: "James Newman's UK entry is one of the strongest in years... it would be criminal if it finished bottom"Andy Abraham's top three favourites for Eurovision 2021: Iceland, Netherlands, SwedenAndy Abraham: "I felt a deep shame at having to become the singing binman again to make ends meet... but the kindness of people got me through it"