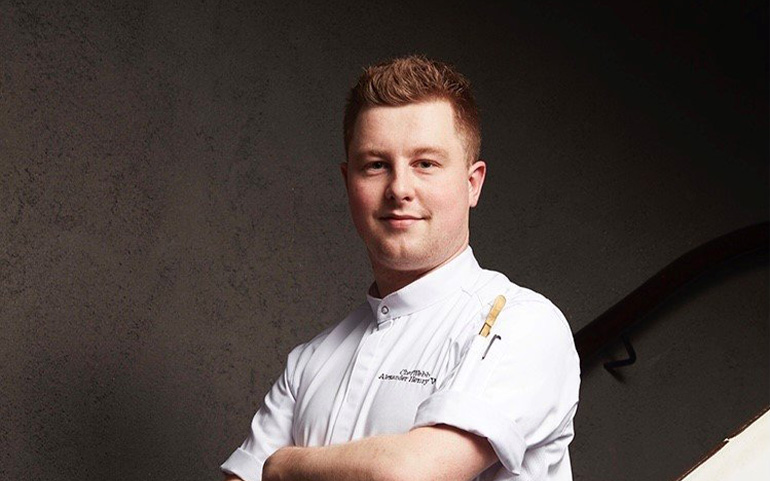 Quick menu:
How do you like your coffee and what is your favourite? Do you ever cook with coffee and what are your top tips? Alex Webb's coffee rub spring lamb with white bean cassoulet, wild garlic, and asparagus (Serves 4)

In today’s Coffee Break column, we sit down with one of the UK’s hottest young chefs – the current MasterChef: The Professionals champion Alex Webb – who at just 25 years old, was one of the youngest participants in the hit BBC show’s history when he swept to victory at the end of last year.

The Essex-based chef is a real ‘rags to riches’ story – starting in the hospitality industry as a pot washer aged 14 in his local restaurant, later having stints at Heston Blumenthal’s Fat Duck and another at The Savoy before winning the famed BBC show.
Since winning the show, he has left his post as head chef of Square One restaurant in Great Dunmow, Essex and turned his hand to being a private chef for dinner parties. He is hoping to open his first restaurant later this year.
Having been described by celeb judge Marcus Warening as “the future of cooking”, he is also a huge coffee drinker, revealing how important it is for a chef to stay alert with a latte or macchiato – and claiming that it was one of the reasons why he won the show!

How do you like your coffee and what is your favourite?

I drink two or three coffees a day – it’s integral for my career as a chef.

If I’m not working and am relaxing, I will go for a latte with an extra shot, with a bit of a caramel in there as well or some frothed milk.
If I am working in the cut and thrust of a kitchen, under a high pressure environment, I always have a double macchiato.
If I am waking up early working a long shift, I need that extra boost of caffeine to sort me out as my day goes on – whereas my latte is just for enjoyment of the taste.
When I first started drinking coffee, much like everyone it was because you were told growing up that it was the thing to keep you more alert – but now I really appreciate the taste of most coffees.
Coffee was an integral part of my time on Masterchef – I’d go so far as to say it helped me win the show! Every day I turned up at the studio, a runner would put a coffee in my hand to start the filming off right.
During the day, there was a fridge full of fizzy drinks and energy drinks – but I always asked for a coffee instead, I couldn’t function without it!

Do you ever cook with coffee and what are your top tips?

I normally use coffee in cooking more for desserts – such as cakes and ice creams. But increasingly, I am using coffee in savoury foods.
For example, recently I made a coffee jelly, the bitterness, and strongness of which goes really well with fish such as salmon to create a really nice distinction of flavours.
Coffee jelly is tricky to make – either you can use espresso or you can make it straight from the beans themselves. The best way is to sieve it through a fine chinois using a J-cloth to get all the sediment out of it. Then mix it with gelatine to make small little bite sized cubes to go perfectly with your fish or meat.
I feel people should use coffee more in main dishes and starters as well as for desserts as a point of difference – coffee has a traditional association with food and it’s hard to see it in a different light.
But much like using chocolate in savoury sauces has become popular in recent years, I am starting to see more chefs treat coffee as a distinctive taste. It adds great depth of flavour, particularly given how many different varieties of coffee there are from all different parts of the globe. 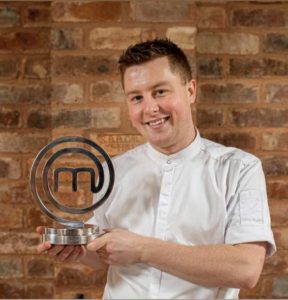 “So many people consume coffee on a daily basis, but never like this – I’m a huge advocate of using coffee more in main dishes and starters as well as just for cakes and ice creams.
“This is the perfect way to take your Easter cooking to the next level. Lamb is a famous Easter tradition, and the infusion of my signature coffee rub goes beautifully with wild garlic which is in season at the moment and available from most supermarkets or greengrocers – while the cassoulet is perfect for sharing on a nice big plate with your loved ones on a balmy spring evening, as the Rule of Six makes a return for outside areas.
“We are using Coffee Friend brand coffee as an alternative to a dry spice rub – but I’ve used its inherent bitterness to combine beautifully with the light and delicate tastes of garlic and rosemary, which are so regularly associated with lamb.
“Spring lamb is very light and tender, often with a milder flavour to traditional lamb. So coffee brings a wonderful depth of flavour, which will bring out an earthiness to the dish alongside the olive oil for extra freshness.
“The more the lamb cooks, the more flavours you will taste in your coffee rub alongside the meat juices, garlic, and rosemary – so I have devised something extra special to finish off your dish…
“Usually, you would finish off your meat with a little bit of salt as the flavours are all on the outside for when you carve – but I’ve devised a unique coffee salt mixture to really take the lamb the extra mile.
“All you do is mix some ground coffee with some fine sea salt and sprinkle it over your lamb, giving it a gorgeous colour and provide a different type of coffee flavour to your rub. Serve your lamb with the light sharing cassoulet and buttery asparagus for an Easter feast with a twist.”

For the rub – take 100g ground coffee and mix together with garlic powder, olive oil, salt, and pepper.

Take your lamb shoulder, score the fat, and cover with the rub. Place two sprigs of rosemary, two sprigs of thyme, and half a garlic bulb in the baking tray and place the lamb on top. Put into the oven for 20 minutes at 190degrees and pour in 200ml white wine. Turn down heat to 180degrees and cook for 30 minutes per 500g.
For the cassoulet – take the diced shallot, celery, carrot, and garlic in a medium pan and sweat on medium heat for 5-8 minutes. Then add 100ml white wine. Add drained butter beans and vegetable stock. Mix in the diced butter to the mixture until it turns creamy then add the sliced wild garlic, juice, and lemon zest and season to taste.
Cook the asparagus in boiling salted water for 2-3 minutes, drain then add butter and salt.
To Serve – Remove lamb from the oven and rest for 10-15 minutes. Place the cassoulet into a large serving dish, slice the rested lamb, place the asparagus around the lamb and a few wild garlic leaves.
To finish – mix half a teaspoon of coffee with some fine sea salt and sprinkle over the lamb