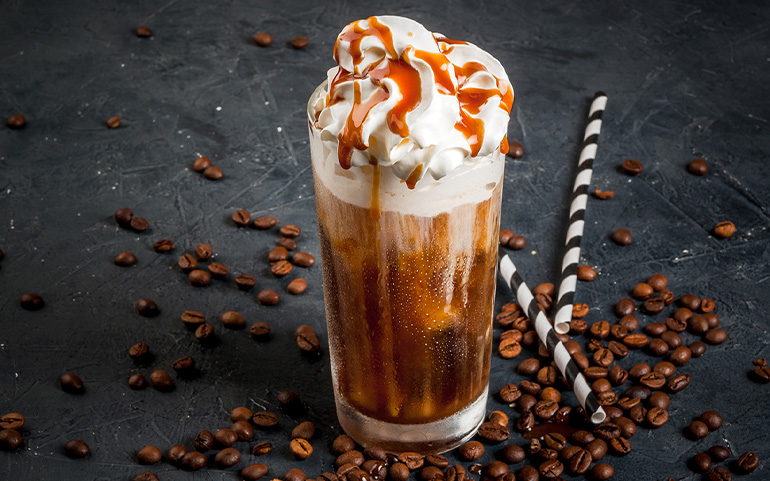 You may have heard of (or even bought) a Frappuccino recently, especially if you’re lucky enough to live somewhere that enjoys warm weather! It is a cold coffee drink and products with this name can only be legally sold by Starbucks – the coffee chain has trademarked the name Frappuccino. But in reality, there are lots of similar drinks served in other chains and cafés and you can also easily make them yourself at home. You might be curious about whether a Frappuccino and another commonly enjoyed drink called a Frappe are the same thing. What is a Frappe (sometimes spelled Frappé)? It is a more generic name given to any chilled, blended drink – and it doesn’t have to be made with coffee, either.

So, a Frappuccino is basically a coffee-flavoured type of Frappe, but you can only buy an official Frappuccino from Starbucks, whereas Frappes are sold widely – even McDonalds serve them.

The history of Frappuccino

Before we look at how to make a Frappuccino or the best recipe for a homemade Frappe, let’s take a look at where these drinks originated from. Frappuccino is just a joining together of the words Frappe and Cappuccino and it was first developed in the USA by a coffee chain, which was then bought out by Starbucks who got exclusive rights to use that name. Frappe/frappé coffee, on the other hand, started becoming really popular in Greece around the 1950s, and which was refreshingly cool in their hot weather as well as being sweet and tasty, so it quickly became a popular choice to refresh.

What’s in a Frappuccino?

Basically, they contain milk, ice, some flavoured syrup (depending on whether you’re having a caramel Frappuccino, white chocolate, or any of the other varieties that Starbucks offer) and finally something called Frappuccino Roast. This is powdered instant coffee, which is added to give the coffee flavour. But at home, you’re not limited to using this – you might prefer to add a shot of real espresso coffee to your homemade Frappuccino! (Starbucks only use Frappuccino Roast powder because they say it makes a better texture of coffee drink).

How to make Frappuccino at home?

First, prepare your ingredients – you’ll need a cup of crushed ice, a shot of espresso (double if you prefer), ¾ of a cup of skimmed milk (don’t worry, you’ll get plenty of richness from the cream), sugar, and some whipped cream. If you’re making a flavoured Frappuccino, then get some flavoured syrups – caramel is the most popular.

The Frappuccino recipe can be altered to suit your individual taste – it’s a highly versatile drink, and can be drunk with vanilla or honey too. You can also make it with decaf coffee beans if you cannot tolerate caffeine or wish to skip the buzz.

How to make Frappe at home?

There are several versions of recipes for how to make frappe. The same versatility is found in Frappes, which as we’ve seen are iced drinks usually but not always containing coffee. You can add whatever you want to it, for example, a mocha frappe is a sweeter, more chocolatey version of the basic Frappe. Here’s one recipe of how to make iced Frappe:

How to make a Caramel Frappe?

Another popular version of the Frappe is the caramel Frappe – sometimes you’ll see it on recipes or menus called the caramel iced frappe –simply follow the steps above but substitute the chocolatey syrup for caramel. Or you could try vanilla syrup instead, another popular flavour. 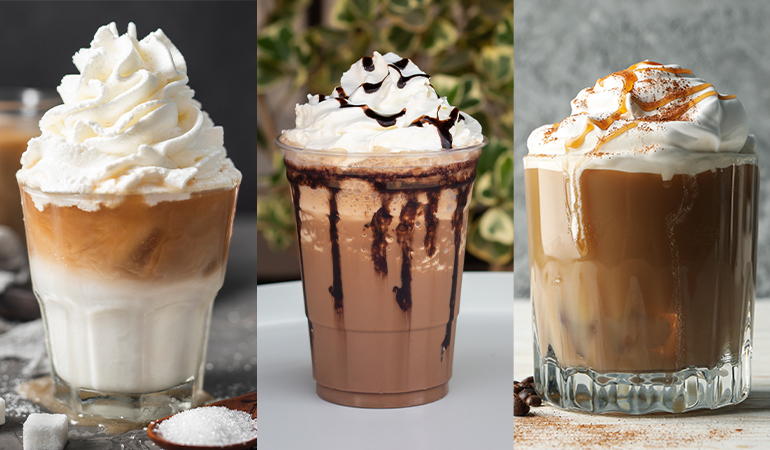 It’s probably sensible to keep a Frappe or Frappuccino as an occasional treat, because these drinks can be quite high in sugar and also saturated fat. This makes for a high calorie count – for example, a Starbucks Mocha Cookie Crumble Frappuccino will contain 500 calories, and a caramel Frappuccino around 420 calories, mostly due to the whipped cream and syrup. Compared to a zero calorie black coffee or espresso, this afternoon drink could serve as a whole meal in some cases! The amount of caffeine in these drinks, however, is actually the same or less than most ordinary coffees.

Of course, if you’re making your own Frappe at home, or trying to recreate a Starbucks Frappuccino in your kitchen, then you can choose to go without the whipped cream, or use less sugar and syrup. Preparing coffee beverages at home allow you to be create and experiment with new flavours, as well as control what exactly goes into your drink, and how much of it. Maybe you generally find take out drinks too sweet or too iced? In your own kitchen you can easily create your own drink menu.

So, now you know what to say if anyone asks you ‘what’s a Frappuccino’, why not experiment today to find your perfect iced-coffee and feel totally chilled with a Frappe?

Q. What is a Frappuccino?

Q. Is there a difference between a Frappe and a Frappuccino?

A. Only that a Frappuccino is an iced cappuccino blend that can only be sold by Starbucks, but in reality it is a type of Frappe and the two can be very similar.

Q. What’s in a Frappuccino?

Q. What is Frappuccino Roast?

A. It is the name that Starbucks have given to the instant coffee powder that they use in their Frappuccinos, to give the coffee flavour. They use powder because they believe it gives a better texture to the drink.

Q. What’s the difference between Frappuccino and Latte?

A. The main difference is that Frappuccinos are always chilled and are thicker as they use crushed ice – Lattes are almost always hot and they don’t use ice. Lattes tend to have more milk than either cappuccinos or Frappuccinos, too.